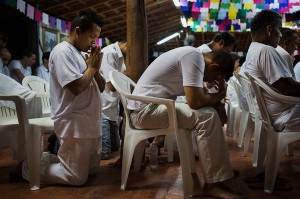 Prisons in Brazil have found a new innovative way to peacefully rehabilitate the inmates. There has been an enormous increase in the number of inmates in prisons in Brazil, resulting in many cases of overcrowding. This has led to human rights violations, violent uprisings and barbaric behaviour in these already underfunded prisons. In fact, one of the most horrific revolts took place in 2002 near Pôrto Velho where approximately 27 inmates were killed at the Urso Branco prison.

Ayahuasca is a psychedelic drink that originates from the Amazon, which is currently being used by different religious groups. Generally, it is made by blending and boiling Banisteriopsis caapi (a vine) with a special leaf called Psychotria viridis. Ayahuasca has become very popular in Brazil, the United states as well as in other countries. Ayahuasca has been described by the members of Ayahuasca Prajna, a community dedicated to the exploration of consciousness, as a brew for detoxification and psychosomatic cleansing, rather than a recreational drug.

Ayahuasca is a powerful and magic decoction which became popular in the Brazilian prisons two years ago, when it was initiated by volunteer therapists at Acuda, a new-age prisoners’ rights group in Porto Velho. The therapists challenged the opinion that inmates should suffer in the prisons. They believe that the prisoners should be seen as human beings with the capacity to change. In theory, ayahuasca should help the inmates become less violent before they return to society as well as reduce the pressure on the prison system. Judges and wardens have permitted approximately 10 prisoners to inhabit Santo Daime, the former army building located in the middle of the jungle. Numerous inmates attend the therapy sessions given in this building each day.

The inmates themselves have stated that taking ayahuasca has helped them to reconnect with their true self. Perhaps more significantly, the inmates are acknowledging their crimes and begging their victims for forgiveness. Celmiro de Almeida, sentenced for homicide, said: “I’m finally realising that I was on the wrong path in this life”.

The effects of the amazonian brew:

Unsurprisingly, there are controversial opinions concerning the rehabilitation program, especially amongst the families of the victims.