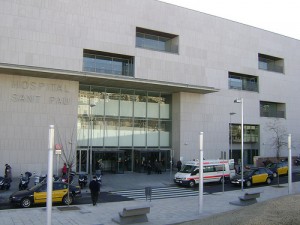 Spain's regional governments are unable to pay many hospitals.

Regional governments cannot afford to pay hospitals and pharmaceutical companies (multinational Roche says the Castilla y Leon region is 900 days behind on its bills). Elsewhere doctors fear for their jobs.

According to Day, the government in Catalonia has begun shutting down some clinics and will lay off 1,500 medical residents if doctors refuse to accept pay cuts.  He quoted one doctor who said:

All of this is because of years of mismanagement by the politicians. The money has run out. We don’t know what is going on. We feel impotent to defend what we have. There is a huge fear of being sacked for doing so.

The deep cost-cutting measures are a result of Europe’s sovereign debt crisis. The Spanish government feels increasing pressure to put its fiscal house in order, lest investors refuse to hold its bonds.

Ironically, as Day observes, the problem with Spain’s public health system is probably that it’s too good. “The system is so good and so cheap,” he writes, “that many people use private health insurance for routine care but head to a public hospital if they are diagnosed with a serious diease or condition.”

All that comes at a price, however, and it’s increasingly apparent that the Spanish haven’t been paying. Schemes to institute a co-pay system and encourage hospitals to use generic rather than prescription drugs have met with harsh criticism.