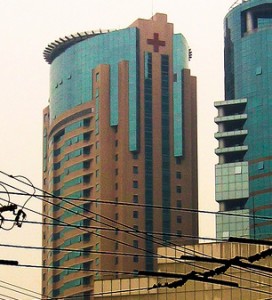 Expats will gain access to China's public health system starting October, but at what price?

In July it was announced that China would be levying a new tax on expats and their employers. At the time the details were frustratingly murky. Now they are out and the clarity is unlikely to make either expats or their employers happy.

China’s new expat tax is set to go into effect on October 15th. It will require expats to pay 11% of their salaries into China’s social security system (in return they’ll get access to China’s public social insurance and healthcare systems). Employers, meanwhile, must make contributions equal to 37% of their payrolls.

The Chinese are spinning the tax as providing foreigners access to the same health benefits as locals. But, as The Economist pointed out in a recent article, these are “perks” most expats don’t want:

Foreigners are unlikely to benefit from unemployment insurance, because if they lose their job they typically lose the right to live in China. The rules suggest that pensions may be portable, but do not say how exactly this will work—and it is difficult for retired foreigners to obtain permanent residency in China.

The situation with healthcare will only drive blood pressures higher. Again, from The Economist:

China’s health system, though improving, is still shoddy by rich-world standards and slapdash about protecting patients’ privacy. Hill & Associates, a Hong Kong-based risk consultancy, fears that foreign firms which leave their expats at the mercy of the Chinese health system could face “a significant liability risk.”

All in all, the so-called “reforms” look more like measures aimed at reducing the population of skilled foreign workers than anything else. It’s unclear whether some firms or expats may be able to apply for exemption from the new tax. What is certain is that no one’s going to be very happy about it.