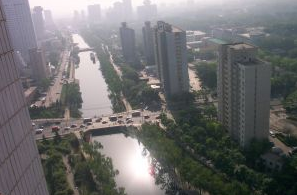 Expats are becoming concerned by the air pollution levels in China’s capital city. With lung cancer on the increase in the local population.

China is considered one of the top destinations for expat assignments, according to the Global Mobility Survey 2012. However, the condition of the air in many of China’s fast developing cities leaves a lot to be desired.

Beijing, or “Greyjing” as it has been dubbed, is full of centuries old heritage sites and cultural gems, however, the chronic air pollution makes it one of the worst cities to live in. Lung cancer rates among the cities 20 million inhabitants are rising, say the cities health officials. Many multinational companies consider Beijing to be a hardship posting, and despite the extra allowances this classification brings, some executives are leaving.

On bad days, Beijing is covered in a brown smog which gets in houses, stings the eyes and darkens the sky in the daytime. Smoke from factories and heating plants, winds blowing in from the Gobi Desert and fumes from millions of vehicles can combine to blanket the city in this pungent shroud for days. This is the reason behind English-speaking residents sometimes calling the city “Greyjing” or “Beige-jing”.

The US embassy’s Twitter feed has hourly posts on the air quality in Beijing and some expatriates plan their days around the air quality. “On a bad day, you’re going to change your plans,” American Chauvon Venick, who moved to Beijing from Los Angeles with her lawyer husband and young daughter earlier this year, told Reuters.

“You wake up, look outside and it’s a great day, you skip whatever you’re going to do and go outside to enjoy it. If it’s a really bad day, maybe we’ll go and do something inside.”

Last year, the state-run China Daily quoted a Beijing health official as saying the lung cancer rate in the city had increased by 60 percent during the past decade, even though the smoking rate during the period had not seen an apparent rise.

The Economist Intelligence Unit’s liveability index this year ranked Beijing’s pollution at 4.5, with 5 being the worst. Out of 70 cities surveyed, the only ones rated worse were Mumbai, New Delhi, Karachi, Dakar, Dhaka and Cairo.

Hello to all, the contents existing at this web site are in fact remarkable for
people knowledge, well, keep up the nice work fellows.