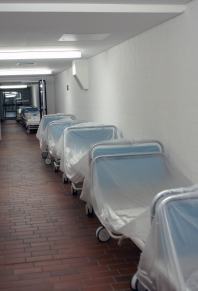 The policy of sending mentally ill patients abroad for treatment is to be reviewed, reports the Irish Independent. This comes after controversy surrounding the decision to cut care for mental health in Ireland.

The Health Service Executive (HSE) mental health division has revealed there are currently eight adults and 12 children being treated abroad as the specialised services they need are not available in Ireland. The HSE said in a letter to Independent senator Ronan Mullen it was in the process of reviewing the procedure for requesting and arranging treatment overseas.

The average cost of sending a patient abroad is €13,000 per month, the HSE said in the letter. The review comes months after the HSE and government were criticised for earmarking several mental health units in Counties Galway and Cork for closure as part of a reconfiguration plan for services.

Mr Mullen called the closures a scandal, particularly that of the 22-bed psychiatric unit in St. Brigid’s Hospital, which cost €2.9 million to refurbish. He said it was “baffling” why thousands of euros were being paid to health providers abroad, while at the same time closing “newly-refurbished state -of-the-art facilities at home”.

The HSE has warned it is facing a severe financial crisis, reports IrishHealth.com. The most recent figures show its deficit has trebled in two months. The deficit of €80.4 million for the end of March, revealed in the HSE’s latest performance report, is also three times what it was at the same time last year (€26.7 million).

Data provided to the Irish Independent from the Child and family Agency showed there are currently 12 children with behavioural problems at facilities abroad. The average weekly cost for out-of-state care for these children is €5,769.