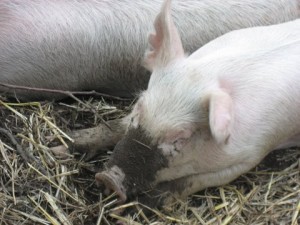 Russian health authorities fear German pigs may carry large amounts of poisonous dioxin, and have slapped a ban on imports.

Every day you eat poison.

We’re talking about dioxin, a deadly family of chemicals present in many of the meat, fish and dairy products we eat every day.

While normally this exposure is limited to trace amounts, Russian health authorities fear German pigs may carry more than their fair share. According to a Reuters report they’ve banned the importing of live pigs from Germany starting November 15th.

The Russians claim the contaminated pigs are a threat to public health. And with good reason.

In the words of the World Health Organization’s (WHO) dioxin factsheet:

Dioxins are environmental pollutants. They have the dubious distinction of belonging to the “dirty dozen”–a group of dangerous chemicals known as persistent organic pollutants. Dioxins are of concern because of their highly toxic potential. Experiments have shown they affect a number of organs and systems. Once dioxins have entered the body, they endure a long time because of their chemical stability and their ability to be absorbed by fat tissue, where they are then stored in the body.

The most common source of dioxin is industrial pollution, including bleaching of pulp paper and the manufacture of pesticides. Doesn’t sound appetizing? Consider also that the few places dioxin develops naturally include volcanic eruptions and forest fires.

In humans, short-term exposure to high concentrations of dioxin can cause skin lesions and liver damage. Over the long term, dioxin impacts the immune system, nervous system and reproductive organs. It has also been shown to cause cancer in animals.

According to Reuters, the Russians say they can’t be sure German pigs are dioxin-free, citing poor coordination between the German health ministry and local vets. Back in January German officials said that animal feed contaminated with dioxin had been fed to pigs and hens. To make matters worse, a sugar producer recently reported unsafe levels of dioxin were present in its production–a key ingredient in animal feed.

German authorities, however, have denied any cause for concern. They told Reuters they are negotiating with the Russians to remove the ban.

Worth noting is that all humans currently have some environmental exposure to dioxin. This is primarily a result of pollution in the environment, which eventually makes it into the food supply. As WHO reports:

More than 90% of human exposure to dioxins is through the food supply. Good controls and practices during primary production, processing, distribution and sale are all essential to the production of safe food.

Consumers can help reduce their exposure to dioxin by trimming fat from meat and drinking low-fat milk. A balanced diet also reduces the likelihood of dangerous exposure from a single source.

Still, WHO notes, “the possibility for consumers to reduce their exposure (on their own) is somewhat limited.”