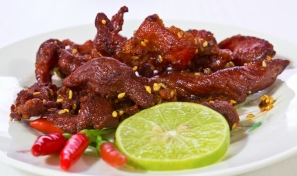 Thai authorities are looking at ways to tackle rising obesity in the Thailand.

Thailand has always been a typical expat destination, the beaches, low cost of living and easygoing way of life have long attracted those looking for a new life abroad. What isn’t usually associated with Thailand is obesity.

It is something, however, that is increasing in the country. According to World Health Organisation (WHO) data from 2011, Thailand is the second fattest country in Southeast Asia with 32.2 percent of adults classified as overweight. Malaysia takes the number one spot with 44.2 percent. Vietnam has the lowest percentage of overweight adults (10.2%), followed by Cambodia (12.1%) and Laos (13.3%).

The Ministry of Public Health in Thailand has revealed 20,000 adults die every year from being overweight or obese. Among females it is the leading cause of death, followed by high blood pressure and high cholesterol, according to a study from the International Health Policy Programme in Thailand. Rising obesity rates are particularly evident in children. Over the past five years the number of overweight preschool has risen by 36 percent.

These increasing figures are thought to be caused by changing diets and a lack of exercise. A move away from the traditional diet based on rice and fresh produce, towards fatty, processed Western food is a problem across much of Southeast Asia. In 2012, WHO suggested soft drinks were a major contributor to obesity in Thailand.

Thai health specialist, Dr Chutima Sirikulchayanonta, warned nearly 70 percent of Thai children are at risk of high cholesterol and 20 percent at risk of becoming obese. The Ministry of Public Health is now working together with private and public organisations to curb childhood obesity. The Thai Health Promotion Foundation suggested, in February 2013, that the government should raise taxes on soft drinks to help tackle obesity.

Vilasinee Adulyanond, director of the Thai Health Promotion Foundation has said teachers and parents are key to reinforcing healthy lifestyle habits among children. Adults should choose healthy snacks, and spend less time on the computer and more time exercising in order for the children to do the same, she states.