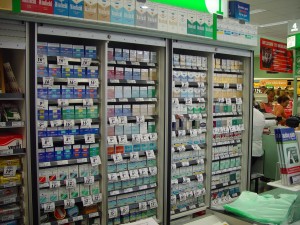 Tobacco companies have largely ignored the deadline for displaying graphic warnings on all cigarette packs sold in Indonesia. The setback is a blow to Indonesia’s anti-smoking campaign and its efforts to lower the smoking rate, currently the highest for male smokers in the world.

Despite being told a year and a half ago, many tobacco companies have not heeded the requirements to cover at least 40 percent of packaging with graphic warnings. The deadline for complying was Tuesday 24th June and campaigners say most companies didn’t make changes.

The National Commission for Child Protection said it found little sign of change in brands being sold in Jakarta and 11 other cities across the country. “This clearly indicates that the cigarette industry has defied Indonesian law,” said commission chair Arist Merdeka Sirait. “The government has been defeated by the cigarette industry.”

Only around 12 percent of the 3,300 tobacco brands owned by 672 companies nationwide have registered the photos they plan to use on their packaging, according to the Food and Drug Monitoring Agency. Manufacturers were given a choice of five images last June.

Health Minister Nafsiah Mboi said companies who missed the deadline will be issued with a warning and continued failure to comply could result in a fine of up to $42,000, and five years in prison.

Indonesia’s largest cigarette supplier, Philip Morris-owned Sampoerna, said it had issued packets with the new warnings on Monday, but needed time to clear its existing stock.

“We believe the government will implement the regulation consistently and fairly, so as to realize a climate of healthy competition among cigarette manufacturers, as well as providing clear information about the impact of smoking on health,” Sampoerna spokesman Tommy Hersyaputera said.

Tobacco controls are particularly contentious in Indonesia, one of the world’s largest producers of cigarettes and a growing market for the industry. Tobacco farmers often hold protests when restrictions are proposed. Indonesia is also one of the few countries which hasn’t joined a World Health Organisation tobacco treaty.

Advertising also runs rife in ways not seen in western countries for years. Billboards, LED displays, and television ads all push cigarettes on Indonesia’s 240 million people. A national survey found 67 percent of males aged of 15 smoke – the highest rate in the world – and 35 percent of the total population regularly smoke, surpassed on only by Russia.