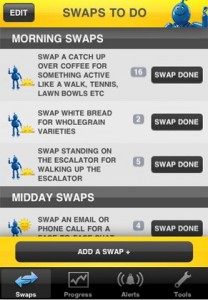 Regardless of where in the world we live, most of our New Year’s resolutions probably include losing weight.

Fortunately we can count on some support from an unlikely source: the Australian government. As part of its Swap It campaign, Australia is offering a number of electronic resources to help people lose weight, including an iPhone app.

The idea behind Swap It is to get people thinking about healthier choices. Substituting fruit for chocolate as a snack, for example, or getting off the bus a stop early to get more exercise.

The app allows you to track your progress, create shopping lists, set reminders for swaps and even earn reward badges as you reach goals. It’s available for free on the app store–which means you don’t have to be Australian to use it.

Australia’s Health Minister, Tanya Plibersek, said that the campaign is to help prevent chronic diseases like diabetes and cut down on obesity rates:

The Government is providing unprecedented support to keep people healthy and out of hospital. Australia needs a health care system that keeps people well, not just one that looks after them when they are sick.

Obesity is bad not only for the health of individuals but also whole economies. In 2008 it cost Australia AUD 58.2 billion worth of treatments for type 2 diabetes, osteoarthritis, cardiovascular disease and cancer.

The Swap It app is just one of AUD 41 million worth of initiatives the Australian government will launch through 2013 to fight obesity.

On Android, you might want to check out Noom as this looks pretty useful.