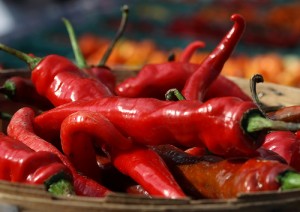 The heat from chili peppers helps ease congestion, according to a recent study.

Capsicum annum contains capsaicin, which is the main component of chili peppers and produces a hot sensation. Capsaicin is also the active ingredient in several topical medications used for temporary pain relief. It is approved for use by the US Food and Drug Administration and is available over the counter.

The study found participants who used a nasal spray with the chili ingredient reported experiencing relief within a minute–faster than the control group using the placebo.

“Basically, we concluded that the spray was safe and effective on non-allergic rhinitis,” Bernstein said. He added that the results were significant in that “we don’t really have good therapies for non-allergenic rhinitis.”

In previous trials the chili ingredient had been too hot to administer without anesthesia.