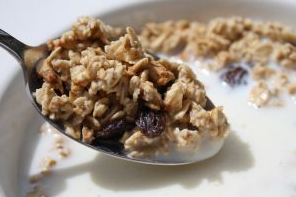 Muesli with soy or rice milk is a low GI food and great for starting off the day.

Typical breakfasts vary around the world but some are healthier than others. The traditional cooked English breakfast with sausages, bacon, fried bread, mushrooms, tomatoes and beans is high on the glycemic food index.

The glycemic index ranks foods on the extent to which they raise blood sugar after eating. High index foods are quickly digested and result in fluctuations in blood sugar. Foods with a low index release energy slowly, gradually raising blood sugar and insulin levels. They are considered healthy, especially for diabetics.

Researchers, speaking at the Institute of Food Technologists’ Wellness 12 meeting, have said that eating food with a low glycemic index at breakfast helps stabilise blood sugar throughout the day. These foods also create a feeling of fullness and can prevent overeating during the day.

Richard Mattes, professor of foods and nutrition at Purdue University, found that people who incorporated low glycemic foods into their breakfasts chose to eat less at other times during the day.

It is estimated that by 2030 16% of the world’s population will have a blood sugar problem. Awareness needs to be raised about the value of eating low glycemic foods for breakfast, especially with the prevalence of pre-diabetes and diabetes in the US and other countries.

“Most of the risk factors are things that can be managed and modified,” said Dr Kantha Shelke, Corvus Blue LLC. “We can reverse pre-diabetes and prevent it from becoming diabetes. Food has become the reason for what’s ailing us, but it can actually be a solution in a number of different ways.”

What are low glycemic foods?

Some examples of low glycemic breakfasts:

Foods to avoid at breakfast: