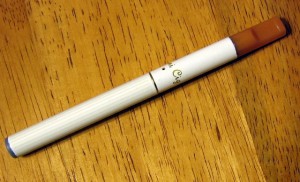 More research is needed on the health impact of electronic cigarettes.

For years people have been trying to escape the health risks of smoking. So those not ready to quit today are looking for safer ways to get nicotine into their bodies.

But does the hype hold up scientifically?

No one knows for sure, though doctors are skeptical. The idea for a “smokeless cigarette” has been around since 1963, but it took decades for a workable model to appear. The e-cigarette as we know it was invented in 2003 by Hon Lik, a Chinese pharmacist. The health merits of the devices have been hotly debated ever since.

Both the World Health Organization and Health Canada have slammed the products. However, UK study found use of smokeless tobacco products preferable to a “quit or die” mentality. A 2010 Boston University School of Public Health study reached a similar conclusion, citing nicotine levels up to 1,000 times lower than normal cigarettes.

If anything there’s been an overload of research on the subject. What’s more since big tobacco has a habit of funding research projects it can be difficult to tell who’s shilling for the industry.

Hence, a new Institute of Medicine report laid out the types of research the US Food and Drug Administration should require before allowing tobacco companies to claim “modified risk” tobacco products such as e-cigarettes are safe. According to the report, more research is needed in the areas of:

What’s more, the Institute of Medicine stressed tobacco companies couldn’t be trusted to produce such research themselves. Jane Henney, a University of Cincinnati Professor who chaired the committee that wrote the report, said:

Right now there’s a shortage of scientific evidence on the health effects of modified risk tobacco products, and the tobacco industry currently lacks the trustworthiness, expertise, and infrastructure to produce it. Having trusted third parties oversee the conduct of research could help re-engage scientists and enable generation of credible research data on the health effects of these products.

Here at Expat Health we don’t believe anyone should consider products like e-cigarettes “safe” until it’s proven by rigorous scientific research. The way we see it, if you quit smoking outright there’s no need to worry about research standards at all.