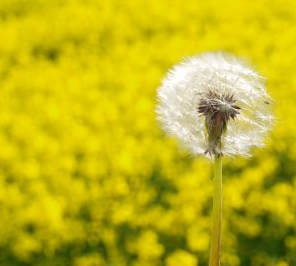 Global warming has meant temperature extremes have become the norm, which will have a knock-on effect on pollen levels. In the last century our planet has gone from one of the coldest decades to one of the hottest, something that hasn’t happened in 11,300 years says a new study.

By 2100, temperatures will rise “well above anything we’ve ever seen in the last 11,000 years,” said study co-author Shaun Marcott. At the same time pollen levels are expected to significantly increase.

In research presented last November to the American College of Allergy, Asthma and Immunology (ACAAI), pollen counts are expected to more than double by 2040. In 2000 the average pollen count was 8,455, by 2040 counts are expected to reach 21,735. Researchers are incorporating various climatic factors in their models including weather patterns, changes in precipitation and temperature.

While pollen counts increase every year, the study found the sneezing season will begin earlier and earlier.

ACAAI allergists recommend allergy sufferers begin treating their symptoms with over-the-counter or prescribed medications two weeks before symptoms usually start. While there isn’t a cure for allergies, immunotherapy is the only treatment that can prevent disease progression. It can also result in health care savings of 41 percent.

“In 2000, annual pollen production began on April 14, and peaked on May 1,” said Dr. Bielory, ACAAI board member and fellow.

“Pollen levels are predicted to peak earlier on April 8, 2040. If allergy sufferers begin long-term treatment such as immunotherapy (allergy shots) now, they will have relief long before 2040 becomes a reality.”

Dealing with an allergy