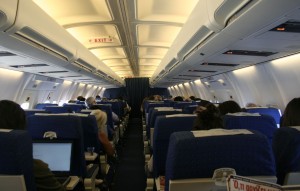 Facts, misconceptions and advice about colds and flu on long haul flights

Taking a long haul flight often involves treading a fine line between travel stress and holiday happiness, which getting ill can easily tip you the wrong side of. There are stories in constant circulation about the risk of colds and flu plane journeys, however not all of them are entirely true. So, here’s a few rumours, facts and precautions which can help ensure a healthy and sickness free journey.

Many people are under the impression that the recirculated air on planes increases the risk of catching a cold or flu virus. However, there is no evidence for this, as the air filters used in these devices are effective enough to catch even some of the tiniest viruses. One slight side effect from this recirculated air is its lack of moisture, which can reduce the amount of mucus in the nose. Mucus is an important bodily defence against infection, and as such it’s important to keep hydrated to keep that mucus flowing!

Something that does increase your chances of becoming ill on a long haul flight is the prolonged proximity to infected people. Although technically a plane is no more virus prone than say a normal commuter train, scientists have found that infection seems to work on contact time – the longer you’re exposed to the germs, the more likely you are to catch an illness. This makes long haul flights a particular problem.

Studies have found you’re at most risk of infection if you are sat within two seats in any direction of an ill person. However, unfortunately if the flight is full you might not be afforded the luxury of being able to move. This problem isn’t the end of the world though, as there are also cases when despite no one in the near vicinity of an infected person getting ill, those further away have been. Hopefully this randomness of infection can at least act as a slight reassurance if you’re stuck next to someone coughing and sneezing all the way through your journey.

The previously mentioned stress associated with taking a holiday can also serve to reduce the strength of your immune system. This can be stress caused by holiday organisation, the rush to finish off any important work before taking time off, or even just the act of flying itself. First and foremost,the best thing to do is try to avoid worrying, after all you are going on holiday! Along with this, Vitamin C supplements can help to maintain your immune system.

Another interesting fact is that, according to the Cardiff University Common Cold Centre, your chance of contracting a cold is four times higher in winter than in summer. Therefore you should take extra precautions when travelling during the winter months.

Overall, it’s unfortunate to say that travel illnesses aren’t so much to blame on the plane you take, so much as your fellow travellers. Therefore if you’re ill yourself when flying, be courteous and use tissues and hand sanitiser so as to lower the chances of spreading your bug around. In turn, you’ll just have to hope everyone else is as thoughtful!