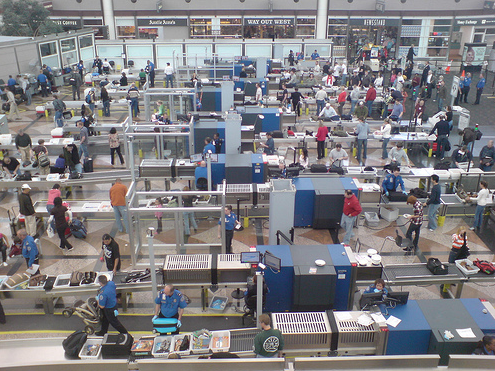 Do X-ray body scanners pose a risk for frequent flyers?

Since the events of 9/11 airport security has been visibly enhanced across the world. The controversial introduction of full-body scanners in many airports may have improved flight security, but what of the health effects?

These full-body scanners are used in conjunction with traditional metal detectors and pat-downs. Millimetre wave scanners, which employ radio waves, show up human skin. Anything which is not human skin is cause for alarm. These have been approved for use in the EU. Scanners which use X-rays come in two different kinds, backscatter and transmission scanners.

The backscatter scanner works shooting low energy X-rays at you which are then reflected off your body. Transmission scanners send high energy X-rays through your body and reveal objects hidden inside the body, much like a traditional medical X-ray. These two scanners produce a more skeletal image than the millimeter wave type. Currently, X-ray scanners are not authorized for use within the EU due to health concerns. Many U.S. airports have installed them however.

How much radiation are we exposed to?

When we have an X-ray the radiation absorbed by our bodies is measured in sieverts (Sv). Over the course of a year a person shouldn’t be exposed to more than 1 millisievert of man-made radiation. This includes sources such as medical devices and security scanners.

Transmission scanner use high energy X-rays to see inside the body and so the dose is 10 times higher than a backscatter machine. In the worst case scenario, someone passing through a transmission scanner three times a day for every working day of the year would absorb three millisieverts of radiation. This is higher than the tolerable limit. In reality this frequency is unlikely to occur, but it could be a concern for airline staff and frequent fliers.

What are the effects for frequent fliers?

Exposure to high levels of radiation can increase the risk of cancer, cardiovascular disease and lead to cloudiness of the eye. There is no evidence the low radiation doses from full-body scanners cause any of these health problems. Nevertheless the radiation dose adds to the total dose we receive in our lifetime and in the long term the risk of developing health problems increases as the dose increases.

However, the increased cancer risk from exposure to airport scanners is so low as to be indistinguishable from natural or background radiation. Direct evidence of an increased cancer
risk has only been found for cumulative doses higher than 100 millisievert.