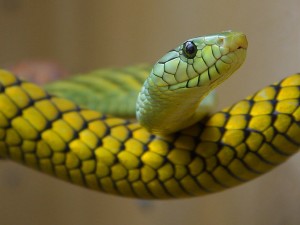 I am one of those expats who will choose a destination based on the culture, the people and the food, but also based on location. More specifically, which location is the least likely to be crawling with venomous critters (which I am absolutely convinced are out to get me).

After a rather nasty pinch from a crab in Veracruz (Mexico) not so long ago, I’ve become very paranoid when anywhere near a creature that could do me harm. Granted, I didn’t die or even require medical attention despite my insistence and to be fair the poor crab must have been scared to death, but hey, it still pinched me!

The world is full of interesting creatures, from fluffy bunnies to, what I like to call, “dangerous man killers”. Variety is the spice of life after all. However, if you happen to be moving to a country where there is a higher likelihood of having non-human neighbours, you should know what to do, or at least what to expect.

There are 3,000 snake species around the world, but only 200 are considered significantly venomous. I use the world “only” loosely, of course. According to data collected, approximately 100,000 people are killed yearly by snakebites, mostly – but not exclusively – in the Sub-Saharan desert and Asia.

Most people are unable to recognise the type of snake they are bitten by, but if you can spot it, make sure you try to remember the colour, size or shape of the head. Seek immediate medical attention. If you are unsure whether the snake is venomous or not, it is better to be safe than sorry. You can recognise a snake bite by two punctured wounds, swelling, nausea, inability to breathe, sweating, blurred vision, and vomiting. While medical attention arrives you should immobilise the limb without restricting blood flow. 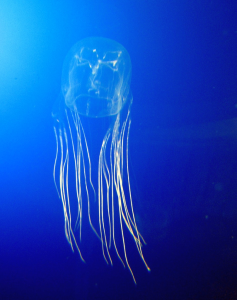 The box jellyfish sounds like the type of character I would love to see in the next Pixar movie; however, they are not quite as cheerful! There are several types of box jellyfish and not all of them are deadly (but they do sting and hurt). The larger species is the one to look out for, and unfortunately, it can cause cardiac arrest within minutes, giving little chance of survival to victims.

When stung by a jellyfish of any type, the best thing to do is seek immediate medical attention. In the meantime, forget everything you’ve read on the internet about urine or vodka (unless you’re drinking the vodka!). Vinegar is used to prevent further venomous discharge from the nematocysts. Protect your hand with a towel or glove and remove additional tentacles. Keep calm and breathe.

In Australia, there have only been 64 reported box jellyfish related deaths since the first one in 1883, which comes to half a death per year, or less. You’re most likely to die from a horse-riding accident. However, in the Philippines, 40 lives a year are claimed by jellyfish. You should still take precaution. If you are snorkeling or diving anywhere with a population of box jellyfish (Australia, Philippines, Gulf of Mexico), make sure you wear pantyhose – both men and women – and full-body wetsuits. Science has recognised that the venom from the jellyfish tentacles is not released by touch, but rather by chemicals found on human skin. 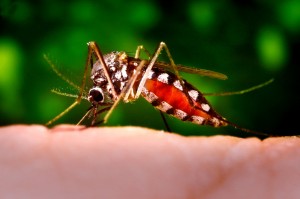 We cannot escape mosquitoes; they are everywhere. I am terrified of mosquitoes for two reasons: I am allergic to a certain type (out of the 2,500 existing ones) and they carry the most diseases. Mosquitoes are responsible for infecting 700 million people a year with diseases, killing between 2 and 3 million annually. Not the friendly neighbour you’d expect to have. While mosquitoes themselves are not deadly, they spread diseases quickly by sucking blood and passing it onto their next victim.

They threaten over half of the world’s population just by existing. The only way to avoid mosquitoes is by moving to Antarctica, where they are unable to survive. But good luck outrunning an angry polar bear. Malaria, dengue, yellow fever, dog heartworm, encephalitis, chikungunya, and the West Nile virus are all mosquito-transmitted. Cheeky little ones.

Malaria claims the lives of over 600,000 people worldwide every year. If you are living or traveling to a malaria-prone area, here are the symptoms to look out for: high fever, shaking, nausea, sweating, vomiting, diarrhea, anemia, muscle pain and even convulsions. There is no vaccine available for malaria, but your doctor can prescribe medications that can help prevent the disease.

Mosquitoes are so dangerous, Bill Gates dedicated a whole Mosquito Week to them on his blog, and even said that instead of Sharknado, he would like to see a movie called “Skeeternado: the tiniest bite is the deadliest bite”. If you’re a screenwriter you’ve got your big break right there. I’m sure he’ll fund!

When moving abroad, double-check your insurance policy to make sure you are covered for unexpected animal-related illnesses and injuries (big or small), as well as medical evacuation if you plan to be in a remote area.