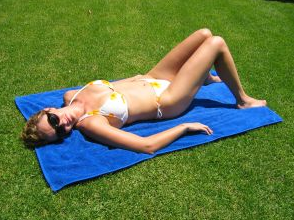 Many young people are still getting sunburnt and not applying sunscreen properly.

Health warnings about the risks of sun damage don’t seem to be getting through to young adults, according to a recent survey. The report, released by the U.S government revealed that over half of under 30 year olds have had sunburn at least once in the past year.

The results are now roughly the same as a decade ago, despite repeated campaigns to warn against the dangers of sunburn. The survey also found women in their 20s are visiting tanning salons twice a month on average.

A report released five years ago showed an improvement in the number of people who had experienced sunburn. It seems, looking at the report released this week, that any positive progress has been wiped out.

Experts say even one blistering sunburn can double your risk of developing melanoma, one of the most serious forms of skin cancer. The Centres for Disease Control and Prevention (CDC) found that more than one-third of those surveyed said they use sunscreen when they are out in the sun – a modest increase from 2005. But some experts said the increasing rate of sunburns suggests many people are not putting on enough sunscreen or are not re-applying it adequately.

How to apply sunscreen correctly

Many expats move abroad to enjoy a better climate and many of the top expat destinations are renowned for their beaches (Thailand, Australia, Spain, Costa Rica…). Make sure to follow these steps on how to apply sunscreen effectively:

Remember, insect repellants can reduce the SPF of your sunscreen by upto one third. So if you are using repellent and sunscreen together make sure to use a higher SPF than usual.