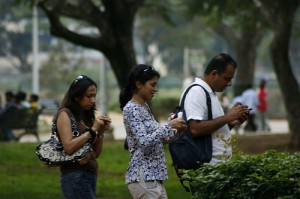 Aetna will help fund and advise a mobile diabetes prevention campaign in India. The goal is to reach 1 million consumers in 2 years.

International health insurer Aetna announced its participation in a campaign using mobile technology to promote diabetes prevention in India. Aetna will work with non-profit Arogya World in an effort to reach 1 million consumers via text message. The campaign is set to last 2 years and will be run across 12 different languages.

As many as 40 million Indians may already be diabetic. That number is estimated to reach 73.5 million by 2025, said Sandip Patel, head of Aetna International. He commented:

Prevention is the most important way to fight non-communicable diseases such as diabetes […] Our experience has demonstrated that cost associated with early detection and disease management is far outweighed by the cost of acute, often emergency hospital treatment.

Aetna will support the mobile health campaign in three key ways: 1)  by making a financial contribution to help fund the effort, 2) serving on an advisory committee, and 3) providing knowledge in the areas of disease management and data analytics.

The diabetes campaign marks one of the first major mobile health initiatives in a developing country. Other participants include Nokia (which is providing support and special technology on its mobile phones), Emory University, Synovate, Biocon and LifeScan Inc.

The Aetna announcement comes on the heels of the 2011 UN Summit on Chronic Disease, which determined more than two-thirds of all global deaths are now the result of chronic conditions such as heart disease, stroke and diabetes. Lifestyle choices such as poor diet, low physical activity, tobacco use and alcohol abuse are all key risks factors.

The move also complements Aetna’s first foray into the Indian healthcare market. In July the insurer acquired Indian Health Organization Limited, a network of 80,000 customers and 3,000 healthcare providers. This, combined with participation in programs such as the diabetes prevent campaign, could build considerable awareness of the Aetna brand in the Indian market. Indian consumers currently spend an average USD 30 billion to cover out-of-pocket medical expenses each year.

Aetna is a US-based health benefits company. It offers a broad range of products to both individuals, employers, university students and expatriates (through Aetna International). Aetna delivered strong first quarter results in 2011 (earnings per share of USD 1.43). Nonetheless, analysts expect this to drop off rather sharply through the rest of 2010 – consensus estimates forecast earnings of USD 1.06 in Q2 and USD 1.03 in Q3. http://www.aetna.com

It is quite good there are certain organization like this, it is a big help towards a better health to the community. We know government also acts towards this situation but we cannot deny that certain things like this really help the society. Diabetes awareness is one great key to avoid a mere complication and somehow prevent other people to acquire this certain disease.