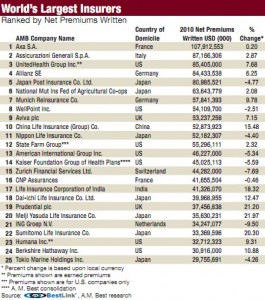 France's AXA was recently ranked the largest insurer in the world by A.M. Best Co.

France’s AXA is (still) the world’s largest insurer, according to rankings by A.M. Best Co., making it an attractive choice for expats the world over. AXA operates in 61 countries and has some 95 million clients.

That figure is 23.8% higher than the second place finisher, Italy’s Assicurazioni Generali, which wrote USD 87.17 billion in premiums.

Overall, the top insurers by net premiums in 2010 were:

For expats who look for financial stability above all else in an insurer, this list’s probably a good place to start.