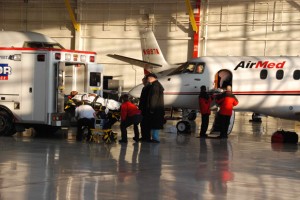 AirMed has launched 4 new plans for expats living in Asia.

If you’re seriously injured while living abroad, you may well need to be evacuated to a different country. This is especially true in the developing world, where medical facilities are sometimes low quality. And if you do have to go, you’re most likely to travel by air.

The company AirMed is counting on it. It recently announced the launch of four medical evacuation plans for expats in Hong Kong, Macau and Mainland China.

It’s a landmark move for AirMed, which previously limited its service solely to North America. Yet despite its limited reach the company still managed to rack up 1 million customers. The move into Asia is an attempt to tap into one of the world’s largest travel markets.

Each of AirMed’s four plans is structured around the basic AirMed Global Membership. It provides for medical transport when an expat is hospitalized more than 300 km from home, without slapping him with out-of-pocket fees or co-pays. Plans have no “medical necessity” restrictions on evacuation, and they allow expats their choice of hospital. Clients aren’t locked into treatment at the “nearest appropriate” facility, either.

Another nice thing about an AirMed membership is it doesn’t require any information about your current health. You don’t have to worry about chronic or pre-existing conditions to sign up (though there are some restrictions on clients who’ve had organ transplants).

The downside is expats won’t find AirMed’s service particularly cheap. The family plan (which covers two adults aged 75 or under and up to 3 dependent children under 26) will set you back over USD 1,000 each year. Granted those figures are less for couples, individuals and students. But most expats already pay for international medical insurance–which means they probably already have evacuation cover.

In the end, an AirMed plan is probably most useful to a wealthy expat who travels frequently while living abroad. Someone who lives in Hong Kong and takes frequent trips elsewhere in southeast Asia, for example. Particularly if her medical insurance only covers a limited geographic area. That way if something happens she can easily fly to a country where she’s covered.

For other expats the value proposition is considerably weaker.