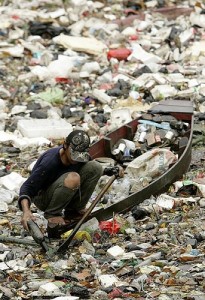 According to the world bank, 16 of the world’s most polluted cities are in China, and Beijing is one of them. China’s appetite for exploiting its natural resources is insatiable, the downside being extreme levels of toxic waste, deforestation and air pollution. It’s the last of these which is presenting Beijing with the biggest problem the city has ever faced. Polluted air directly kills hundreds of thousands of Chinese every year and, according to the Chinese Ministry of Health, is, alongside smoking, responsible for making cancer the country’s leading cause of death. Beijing also now boasts China’s youngest ever lung cancer victim – an eight year old girl.

At its worst, the thick smog that descends on the capital can make it hard to see just fifty feet in front of you and has now got to the stage where the reduced visibility is grounding flights. The US embassy’s air monitoring system recently attempted to get a particle reading but, after monitoring Beijing’s air, found that their instruments could not measure pollution that high. Beijing’s smog levels are, quite literally, off the chart.

The Cintarum River snakes for 300 kilometres through West Java province in Indonesia. In parts, you can’t even see the water for the rubbish which floats like a moving dump through the towns and villages which once relied on fishing for their livelihoods. These days, many go out in their boats to sift through the soggy detritus, looking for anything they might be able to sell. The lead, cadmium, chromium, as well as innumerable pesticides that pollute the river with quantities up to 1000 times the recommended level, make this dangerous work.

Worse still, Jakarta, Indonesia’s sprawling capital of 10 million people, relies on the Cintarum for its water supply, directly siphoning off more than 80% of its surface water and pumping it into homes and factories. It also irrigates paddies that provide 5% of the entire country’s rice. The government plans to sanitise the river as part of a rehabilitation project. This is no small task however; it’s expected to take fifteen years at a cost of US$3.5 billion.

Take a country where it’s cheaper to fill your shopping trolley with snacks and convenience food than fruit or vegetables, combine this fact with incessant advertising promoting those very products, and you’ve all the makings of one of the world’s worst obesity epidemics.

Mexico may recently have overtaken the USA in the global obesity league table, but at least it’s cheap and easy to buy fresh fruit and vegetables there should you be so inclined. Foreigners moving to the United States are often shocked to find that it’s often cheaper not to eat healthily than the other way around. The problem, though widely acknowledged, is not getting better: between 1980 and 2000, obesity rates doubled in the USA. Despite the bargains shoppers can find on high-calorie foods in US supermarkets, obesity turns out to be an expensive habit with obese Americans spending on average $1429 more on annual medical expenses than healthy individuals.

There’s no doubt about it: gunshot wounds are bad for your health – and if you move to San Pedro Sula, you’ve got a pretty decent chance of getting one. Holding the dubious distinction of being the world’s most dangerous city outside of a warzone, San Pedro has a rate of 169 murders per 100,000 people; averaging three a day. It’s not the most welcoming city in the world either, the constant state of fear and suspicion caused by endemic gang warfare and drugs trafficking has made the city’s population understandably wary of outsiders.

According to WHO figures, Botswana is in a sorry state when it comes to health. A mere 6% of the population live to see 60, with AIDS the biggest killer and life expectancy consistently hovering around the low to mid-thirties. Outside the capital, medical care is about as rudimentary as it’s possible to get and even in Gabarone better services are way beyond the financial reach of most Botswanans. The risk of malaria is high in the north of the country where, as luck would have it, you’re furthest away from Botswana’s only big city – your main chance of getting decent medical attention.