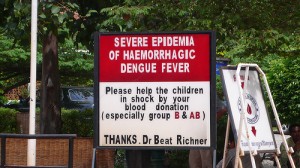 Dengue fever is common in popular expat destinations such as India, Malaysia and Thailand.

Dengue fever is one of the world’s most serious health issues, impacting an average 50 million people in 100 countries annually. These include popular expat destinations such as India, Malaysia and Thailand. Each year, dengue kills thousands and forces hundreds of thousands more to seek hospital treatment. Worldwide, the annual cost of treating the disease is in the billions of dollars. Now, however, scientists have found that a common bacterium may be able to stop it from spreading.

Research has shown a bacteria common in fruit flies can prevent the Aedes aegypti mosquito from transmitting the disease. The study was conducted by a group of researchers as part of the Eliminate Dengue program, which aims to stop the spread of dengue fever by introducing a naturally occurring bacterium called Wolbachia (which is not harmful to humans) into the wild mosquito population.

When mosquitoes carrying Wolbachia are introduced into the environment, they mate with wild mosquitoes, and pass Wolbachia to their offspring until all Aedes aegypti mosquitoes have Wolbachia. If mosquitoes don’t become infected with dengue, they cannot transmit the virus to people.

Researchers infected female mosquitos with two different strains of Wolbachia bacteria and did experiments to test the ability of the strains to spread throughout mosquito populations. They found that both strains seemed to block the transmission of dengue virus, and that one was able to infect almost the entire test population in just a few generations.

“This is a simple, non-chemical, non-harmful way to reduce the threat of dengue to humans,” Lloyd said. “It could have a transformative effect on the health of literally millions of people worldwide.”