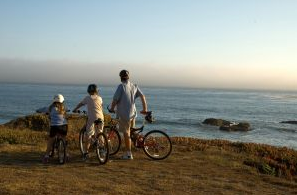 Living and exercising on the coast is better for your health than spending time in an urban park.

Exercise in the great outdoors is good for you, but exercising on the coast is even better according to a new study. The study, from the European Centre for Environment and Human Health (ECEHH), found all outdoor locations were associated with positive feelings. The findings were presented to the British Psychological Societythis week.

Visits to the coast were found to be most beneficial, giving feelings of enjoyment, calmness and refreshment. Going to an urban park was found to be the least beneficial to health. The study looked at 2,750 people’s responses about their engagement with the natural environment over a two year period.

The findings remained unchanged when researchers took into account people’s ages, how far they had travelled, the presence of others and the activity they undertook. While there have been many studies on the health benefits of outdoor environments, this is one of the first to delve deeper.

“There is a lot of work on the beneficial effects of visiting natural environments, but our findings suggest it is time to move beyond a simple urban vs rural debate and start looking at the effect that different natural environments have on people’s health and well-being,” said Dr Mathew White, a lecturer in health and risk from the ECEHH.

A survey conducted by Lloyds TSB International for the Telegraph Expat asked over 1,000 expatriates in the 10 most popular expat destinations to rate their adopted countries. It found British expats were happiest in Spain with 75.9% saying they were happier there than they were  in the UK. Expats living in Spain mentioned the outdoor lifestyle and beach access as something they loved about the country.

According to the results of the ECEHH study these expats who spend more time outdoors, especially by the beach will improve their mental and physical health than those who are more inclined to stay indoors.

John Kramer, a British expat who lives in Andalucia, told the Telegraph Expat he was unsurprised by the fact most expats were happier in Spain. Because its “outdoor lifestyle, traditional family values, and positive outlook on life” made it a very easy place to enjoy.

Lisa Sadleir, a 20 year expatriate in Spain told the Telegraph Expat, “The best things in life are free and it costs nothing to head out into the dunes and enjoy a day on the beach.”

My partner and I stumbled over here by a different website and thought I might as well check things
out. I like what I see so now i am following you. Look forward to looking
at your web page repeatedly.

I totally agree, I grew up by the sea and now I really miss it living in Madrid. Just a walk along the beach makes me feel better!

Being by the coast is very good for everybody, as it influences not only our health, but mood too and allows us to feel good and better!