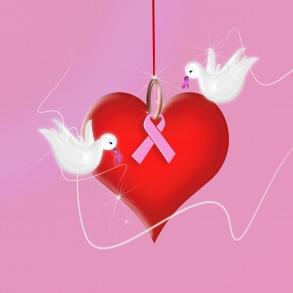 Individual treatments are already available for people with breast cancer.

On the 3 December, the Dutch insurance company Ditzo started a unique campaign to help cancer research, all inspired by Professor René Bernhards, who works at the Netherlands Cancer Institute.

It all started when Professor Bernhards was a guest on the popular Dutch talk show “De Wereld Draait Door” (The World is Going Crazy), where he explained that with enough research, cancer could become a chronic disease rather than a deadly one.

The host Matthijs van Nieuwkerk summed up the interview by asking “We’re almost there, but we just need more money to solve it. Isn’t that right?”.

As an answer, Professor Bernhards explains that “money can solve a lot, it can solve cancer too. But it is always a question if people are willing to make the important choice and really invest”.

After this interview, the insurance company decided to take the step and invest. It came up with a campaign which would show the power of social media. On the third of December, Ditzo created a video, explaining that instead of broadcasting their commercials, the reserved advertising budget would be donated to Professor Bernhards’ cancer research. The video can be found at the end of this article.

Their goal was to gain a maximum of €1,000,000 before Christmas but they underestimated the power of social media, as this amount was raised in a mere four days.

The Antoni van Leeuwenhoek Hospital and Netherlands Cancer Institute were naturally delighted with the result and they will use the money for people with specific tumors, giving them the individual treatment they need, as no cancer is the same. At the moment, these individual treatments are only possible for people with lung cancer, breast cancer and colorectal cancer. Research should make it possible for other kinds of cancer as well.

Just before this campaign, there was a lot of discussion about insurance companies spending too much money on attracting “switching” customers. This occurs particularly in November and December when residents in the Netherlands decide whether to renew their insurance or choose a new provider.

Opinion was rather divided at the end of the campaign with some claiming it was all a big marketing stunt. With this video, Ditzo didn’t spend much money, but received a lot of promotion.

Marketing stunt or not, everybody is delighted with the fact €1,000,000 has been made available for cancer research. This horrible and devastating disease is still on this planet, yet we are one step closer to getting rid of it.