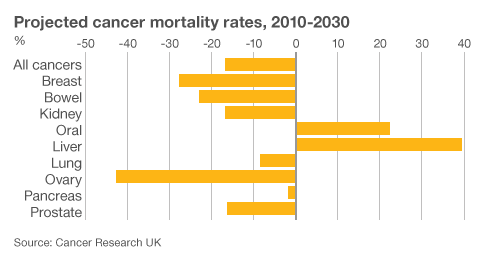 The number of people dying of cancer will fall dramatically over the next 20 years, according to Cancer Research UK. The statistics, published by the UK charity, show death rates are predicted to fall 17 percent by 2030. This drop can be attributed to fewer people smoking and improvements in treatment and diagnosis.

Ovarian cancer will see the biggest fall with death rates expected to reduce by 43 percent. A decrease of 9.1 women per 100,000 to 5.3 by 2030. The figures also show that breast cancer, bowel and prostate cancer will have significant reductions in the number of people in every 100,000 dying – falling by 28% for breast cancer, 23% for bowel cancer and 16% for prostate cancer.

The Department of Health told the BBC, “These figures reflect improvements in cancer services, but we know there is still more to do.

“Our aim is to save 5,000 more lives every year by 2015 – and halve the gap in cancer survival between us and the best-performing countries in Europe.”