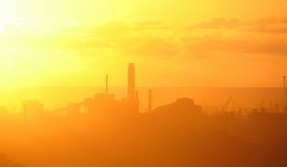 Expats living in polluted cities are at an increased risk of suffering a second heart attack.

The risk of suffering a second heart attack increases 40 percent if you live in an area with high air pollution. Air pollution, while being bad for the environment, is also linked to respiratory infections, lung cancer and heart disease. A study from the University of Tel Aviv has found pollution impacts cardiac events and stroke, and can cause repeated episodes over time.

“The results of the study not only indicate a health benefit for a public policy that curtails air pollution caused by industrial emissions and second hand smoke, but also call for heightened awareness by clinicians. Doctors should be making their patients aware of the risks of remaining in high pollution areas, suggesting that they work to limit their exposure,” Dr. Yariv Gerber, of Tel Aviv University’s Public Health Department, suggests.

Cities with the worst air pollution

Hong Kong – The Air Pollution Index, which rates the likelihood of people getting ill due to air pollution recently reached 500 – the highest score possible.

Los Angeles (metropolitan area) – This U.S city has some of the worst air pollution in the country. In the American Lung Association’s (ALA) State of the Air Report 2010, the region was named the worst in the country for ozone pollution. Breathing ozone is akin to getting sunburn in your airways, according to the ALA’s chief medical officer.

Beijing – Unsurprisingly, several Chinese cities feature highly on the Air Pollution Index. Beijing is one of the worst for air pollution, along with Chongqing and Guangzhou.

Mexico City – Mexico City has the highest level of ground-level ozone in the world, according to the World Health Organisation. Worryingly, it also has high levels of almost all major, harmful airborne pollutants, say researchers at the University of Salzburg.