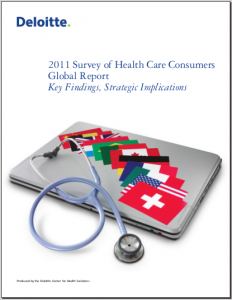 Healthcare costs and a slowing economy are of key concern to consumers, found Deloitte in its 2011 Survey of Healthcare Consumers. Nearly half of respondents across 12 countries said their spending on healthcare had increased in the last year.

In the United States the results were perhaps most disheartening: 25% of Americans admitted to not seeing a doctor when sick or injured, another 19% to not following a prescribed course of treatment. 23% were unsure they would be able to handle future medical costs (compared with 22% in Brazil and Mexico).

Only 1 in 5 Americans expressed satisfaction with their health system–more than half said they believed 50% or more of health spending was wasteful, second to only the 65% of Mexicans who felt the same way.

Though it is fashionable–and exceptionally easy–to spot the weaknesses in the American system, Deloitte found consumers across countries dissatisfied with the management of their respective health systems. Overall, fewer than 1 in 5 people said agreed with the statement that “government is doing a good job balancing priorities in the healthcare system.”

In most countries, consumers are considered “patients” who lack the knowledge, skills, and resources to appropriately manage their health and reduce their financial exposure to healthcare costs. ‘Patients’ tend to be disengaged and dependent on their traditional healthcare system; in contrast, “consumers” are actively involved in decisions about their care and associated costs – they take initiative in improving their health, seek and use information, consider different care options, and make choices that meet their preferences […]

[…] Notably, consumers’ recognition of high-performing health care systems is not related to how much is spent or the pervasiveness of the government’s structural and operational role. Instead, recognition is a result of a system’s meeting, or in some cases, exceeding consumer expectations.