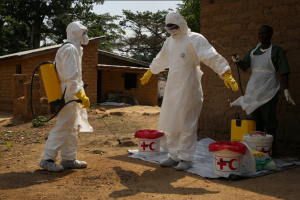 The Ebola virus has been a hot topic in health news since the world’s biggest outbreak began in 2013 in Guinea. We bring you the facts about this disease, and the current outbreak.

Ebola virus disease (EVD) or Ebola haemorrhagic fever (EHF) was first isolated during an outbreak in Zaire in 1976. It is named after the Ebola river in modern-day Democratic Republic of the Congo (then Zaire), where one of the original outbreaks occurred.

The virus is typically acquired upon contact with infected bodily fluids or blood and symptoms appear anywhere between two days to three weeks after infection. Early symptoms include fever, headache, sore throat, and muscle pains. As the virus progresses, nausea, vomiting, and diarrhoea occur, followed by the haemorrhagic, or bleeding, stage.

The virus has a very high fatality rate, in April 2014 WHO put the figure at 60%-65% after assessing all occurrences to date.

How is it treated?

There is no licensed cure for Ebola. Once the virus has been diagnosed, treatment includes supportive measures such as maintaining fluid levels, preventing dehydration, pain management, and the administration of anticoagulants early on.

There is an experimental vaccine which has been used during the current outbreak, although it hasn’t undergone human testing yet. Clinical trials have been approved for a GSK vaccine, but even if the results are good it won’t be ready for widespread use until 2015. Another experimental drug, known as ZMapp, was used for the first time on two American health workers in July 2014, causing controversy over making it available to African patients. ZMapp was also administered to the Spanish priest who contracted Ebola while volunteering in Liberia, he was repatriated to Madrid and subsequently died on August 12.

Where is it found?

Outbreaks tend to occur in tropical Sub-Saharan Africa. Between 1976 and 2013 fewer than 1,000 people were infected each year. The current outbreak is the largest ever seen, originating in Guinea in December 2013, it wasn’t detected until March 2014. WHO estimates Ebola has infected 1,848 people and killed over 1,000 across the four main countries involved.

Who has been affected so far?

The current outbreak has mainly affected people in four countries – Nigeria, Guinea, Sierra Leone and Liberia. Spain is the only country outside Africa which has a confirmed Ebola death, a Catholic missionary who contracted the disease in Liberia, died after being repatriated to Spain for treatment. The death toll is estimated at 1,013, with a total of 1,848 cases reported in this current outbreak.

What is being done?

The four countries most affected have taken steps to stop the spread of the disease. Early this month Guinea closed its borders with Sierra Leone and Liberia, and all of Liberia’s borders are closed with the exception of certain crossing points and the main airport.

The World Health Organisation declared this Ebola outbreak an international public health emergency early in August, however it is not recommending any international travel or trade restrictions. The likelihood of Ebola spreading through a developed country such as the USA is small. Ebola isn’t airborne like flu for example, it is only spread through direct contact with infected fluids or blood. The reason it has spread from Guinea to neighbouring countries is the lack of medical infrastructure.

“Countries affected to date simply do not have the capacity to manage an outbreak of this size and complexity on their own, said Margaret Chan, the WHO’s director general. “Challenges remain in reaching families in rural communities who were struggling to access healthcare even before the outbreak.”