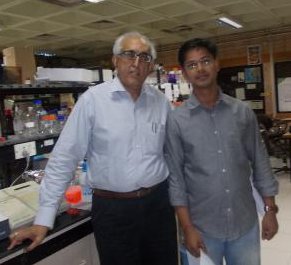 Two Indian researchers are developing a device that can detect tuberculosis-potentially even lung cancer-on a patient's breath.

It may sound like something out of a cartoon, but rest assured it’s true: two Indian researchers have been awarded a USD 950,000 grant to develop an “electronic nose” capable of detecting tuberculosis in a patient’s breath.

Grand Challenges Canada and the Bill & Melinda Gates Foundation awarded Professor Virandar Chauhan and Doctor Ranjan Nanda the money to test the feasibility of their design. The electronic nose is a hand-held, battery-operated device that would make testing for TB far easier and cheaper. At present, doctors usually screen for TB using the Mantoux test,  which requires an injection.

We hope to take the concept of the Electronic Nose to the next level by developing and testing a prototype of the hand-held, battery-powered device. Our goal is to make the Electronic Nose widely available in poor, remote areas where tuberculosis often breeds and spreads, devastating so many lives.

Despite having been eliminated from most developed countries, TB still kills nearly 1.7 million people each year, mostly in Latin America, Asia and Russia. Popular expat destinations such as India, China and the Philippines all play host to high numbers of TB cases.

Chauhan and Nanda estimate their device could save as many as 400,000 lives each year.

Other scientists, too, have high hopes for the nose. There are signs it may be adapted for use in detecting pneumonia and even lung cancer–any disease that leaves biomarkers on a patient’s breath. That means the Nose may someday have health applications in developed countries, too.

Imagine detecting tuberculosis through a person’s breath and the number of people who can be saved. We are pleased to support this discovery and, through Grand Challenges Canada’s Integrated Innovation approach, to ensure rapid patient utilization and commercialization, so that the Electronic Nose is available, cost-effectively.

And no, it’s not actually shaped like a nose.