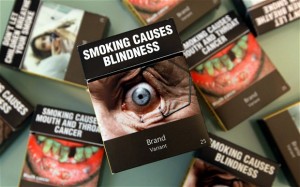 In 2012 Australia implemented laws on tobacco packaging making graphic pictures mandatory and banning any branding. Not only were the images more shocking than ever, displaying diseased gums and gangrenous feet, but the size of the images were also made larger.

What the smokers think

What do you think of these changes? Published in Tobacco Control, a study has shown that over half (56%) of Aussie smokers were not in favour of the changes back in 2012, nevertheless, two years on and 49% are now in favour of the packaging. Interestingly, those who are most supportive of this anti-smoking campaign were smokers who were trying to quit. This seems like a positive result, with many Aussie smokers backing the campaign in the hope that it will help them quit for good.

So do the grisly images work?

Despite tobacco companies insisting that plain packaging will make no real difference, studies from the Australian Bureau of Statistics show otherwise. It looks like the ban on branding has lead to an all time smoking low in 2014, in addition, there has been the greatest three year dip in smoking from 2010 to 2014 since 1991.

If you live in Europe, would you be in favour of plain packaging as in Australia? According to the World Health Organisation (WHO), Europe is the chain smoker of continents, whereby 16% of deaths are tobacco related, in comparison to the global average of 12%. Moreover, despite the public smoking bans, elevated taxes and hard hitting death campaigns, the French have actually increased their smoking habits!

The UK has already acknowledged that the strain on the public health service would be much reduced if it weren’t for tobacco related illnesses. Members of the European Union are considering taking a leaf from Australia’s book when it comes to smoking and introducing plain packaging regulations.

Let us know what the policy is where you live and what you think about graphic images to discourage smoking.