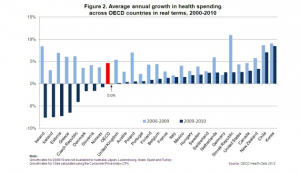 Growth in health spending slowed or fell in 2010 in almost all Organisation for Economic Co-operation and Development (OECD) countries. This follows a period of rapid spending increases in the 34 OECD countries.

According to OECD health data for 2012 overall spending grew by 5% per year between 2000 and 2009. This was followed by zero growth in 2010. Preliminary figures for a limited number of countries suggest little or no growth in 2011.

At the start of the economic crisis, government health spending remained steady. It was in 2010 that cut to health spending started to appear. This was particularly evident in European countries worst affected by the crisis.

In Ireland the reductions were made by cutting the salaries and fees paid to health professionals and pharmaceutical companies. Ireland has also reduced the number of health workers to help lower costs. In Estonia the government cut administrative costs in the ministry of health and also reduced the prices of publicly reimbursed health services.

Health spending growth has slowed down outside of Europe. It decreased around 3% in the United States, Canada and New Zealand. However, in South Korea spending grew by 8% in 2010.