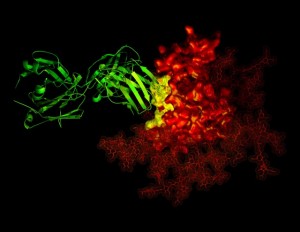 The structure of an antibody latches onto the HIV virus.

A study published in Nature, the international science journal, describe the promising results of a human antibody trial to fight HIV.

The approach used in the new treatment is called passive immunisation. It involves infusing antibodies into the blood. Antibodies effectively neutralise foreign cells, like bacteria or viruses, by coating the virus cell to prevent it from infecting the white blood cells.

HIV positive sufferers produce the antibody used in this treatment naturally, but at varying degrees of strength. The most powerful version of this human antibody were cloned and used in this trial.

In theory, the rate at which the HIV virus mutates should decrease and the weakened immune system of the individual is given a boost.

A single dose of the antibody, varying between 1 mg/kg, 3 mg/kg, 10 mg/kg and 30 mg/kg, was given to 17 HIV-1 infected patients. They were then monitored over the course of 56 days. The presence of the virus decreased by up to 300 times in the patients who were given the strongest dosage and the protection lasted more than 4 weeks.

However, since the HIV virus is able to mutate itself at a rapid pace, there are concerns regarding the long-term efficacy of this treatment. The results demonstrated that the antibodies became 80% less effective in 2 out of 17 of the patients after 28 days of treatment. To overcome this issue and make further progress, there are plans to trial this treatment alongside current antiretroviral therapy.

“This is an early study, but it’s a study with some impressive results.” said Anthony Fauci, director of the US National Institute of Allergy and Infectious Diseases.