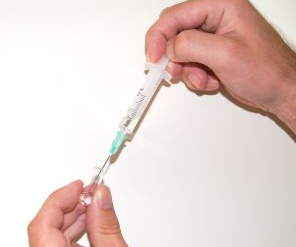 Many adults weren’t immunized as children or their immunity has worn off.

In the US 40,000 adults die per year from immunization-preventable illnesses. To raise awareness of adult vaccinations and how they work, the American Academy of Microbiology has released a new report called FAQ: Adult Vaccines – A Grown Up Thing to Do.In the last century several high profile diseases have been partially or totally eradicated by vaccine programmes. Smallpox is now considered totally eradicated thanks to a global immunization programme and the fact symptoms are easily recognizable. Polio, mumps and dracunculiasis (Guinea worm disease) have been eradicated in some regions but remain prevalent in others. These will hopefully be next for total eradication.

What’s in the vaccination guide?

The report covers everything, from the history of vaccines, how they work, what they are made of and why adults need them. It suggests that as an adult it isn’t too late to receive a vaccination (something many adults think) and some vaccinations are specifically recommended for adults. People who were vaccinated as children may not still be immune to the disease as immunity can fade over time.

Some “childhood” diseases are much more serious if contracted as an adult. Shingles is caused by the same pathogen as chickenpox. It generally targets adults and causes a rash, blistering as well as complications with eyesight and hearing. As it is rarely seen in children the vaccine is recommended for adults.

Who should be immunized?

It’s recommended that pregnant women have influenza and combination tetanus – whooping cough immunizations. These are administered as non-live vaccines which makes them safer for the unborn baby.

Whether you were vaccinated as a child or not, it is never too late. Those with suppressed immune systems, pregnant women and the elderly are most at risk and should consult with their physician about the suitability of vaccines for them. Top-up or “booster” vaccinations are available for those who were immunized several years ago.

Immunizations you may have received as a child depend on where you were born and when. Newer vaccinations may not have been available when you were young. If you are in doubt it’s best to visit your physician today. Those who travel internationally (especially in Asia, Africa and South America) may require injections against a wider variety of illnesses.