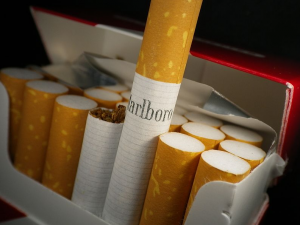 The ‘Don’t Be a Maybe. Be Marlboro’ campaign has been banned in Germany.

Philip Morris International (PMI) has come under fire for its Marlboro cigarette advertising campaign “Be Marlboro”. Public health groups say it appeals to youth and portrays smoking as “cool”.

A coalition of anti-tobacco organisations has released a report detailing how the campaign, which has spread to 50 countries, uses images and themes which appeal to young people. The report, entitled You’re the Target, claims the marketing campaign links smoking Marlboro with risk-taking, rebellion, and exploration, all themes which, critics argue, appeal to young viewers. The message “Don’t Be a Maybe. Be Marlboro” is shown along with pictures of young people partying, playing music, falling in love, and snowboarding or surfing.

The advertisement was launched in Germany in 2011 and was banned in the country in October 2013 based on the fact it targets youth. A German court found it encouraged children as young as 14 to smoke, in violation of Germany’s tobacco advertising laws, and that “the advertising specifically targets risk-taking, rebellious youths”. PMI has indicated it will challenge the ruling but currently the ban remains in place.

Similar complaints have also been lodged in Switzerland, Brazil, and Colombia. Despite the German court’s ruling PMI continues to release the campaign globally, including in many low- and middle-income countries struggling with high smoking rates and related death and disease. These include Argentina, Brazil, China, Colombia, Indonesia, the Philippines, Russia, Saudi Arabia and Ukraine.

The anti-tobacco groups have accused PMI of breaching its own ethical code which says “We do not and will not market our products to minors, including the use of images and content with particular appeal to minors” with the global advertising campaign.

“Philip Morris International claims it doesn’t market to kids, but the evidence in this report shows otherwise. Just like the Marlboro Man campaign, the new ‘Be Marlboro’ campaign uses themes and images that  are sure to appeal to kids around the world” said Matthew L. Myers, president of the U.S.-based Campaign for Tobacco-Free Kids in a statement.

The report also found that tobacco companies target low- to middle-income countries, where 80 percent of the world’s smokers live. Many of these countries have weak tobacco advertising laws, allowing tobacco companies to aggressively market their products to young people and adults alike.

“We need urgent action to stop this campaign before it further fuels the global tobacco epidemic”, said Meyers.

Image: Marlboro cigarette in pack by Nikita2760. Available under CC BY 3.0