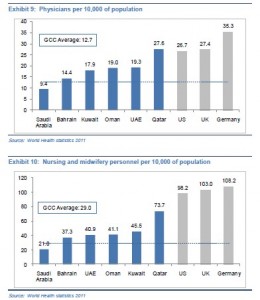 “Brain drain” is a popular topic these days. It’s the tendency for highly skilled professionals from developing countries in the Middle East Africa and Asia to head abroad rather than work in their home countries. In the Middle East, this has triggered a shortage of qualified medical staff.

And ironically it’s led countries to rely on expat doctors and nurses to plug the gaps.

Concerns about insufficient medical staff have amplified amid high dependence on expatriate medical personnel. High proportion of expatriates in medical staff poses a challenge of difference in culture, medical practices and patient care. In addition, they are subject to high attrition as they view their residence in the GCC as a learning experience for international exposure and later move back to home countries or developed markets for higher paid jobs.

As a result, Gulf countries have created numerous initiatives to boost numbers of healthcare staff. A few examples:

This trend has a couple key implications for expats. First (and this is a good thing), healthcare standards in Gulf countries are likely to improve further. Life expectancy has increased and infant mortality declined in recent decades–strong indicators of improving health standards.

Second, demand for expat workers in the health sectors may slowly begin to decline as new policies take effect. In some countries this will happen more drastically than others. In Saudi Arabia, for example, foreign nurses who have been working 10 years or more will be released from service at the end of 2011.