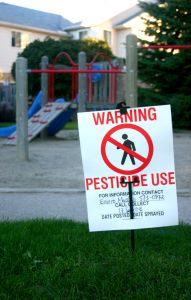 An international campaign is raising awareness of the health risks of exposing children to pesticides.

On World Environment Day last week, Pesticide Action Network (PAN) Asia and the Pacific and PAN North America jointly launched a campaign to protect children from pesticides. We currently use 50 times more pesticides globally than we did six decades ago. Their harmful impact on the environment and human health has increased – and evidence is showing children are more vulnerable to their effects.

Aside from their use in agriculture and food production, pesticides are regularly employed around the home, in schools, parks and other public places, exposing children to harmful effects on a daily basis. Exposure to pesticides has been linked to life-long health problems, such as asthma, cancers, birth defects, and diabetes.

“Infants are infinitely more sensitive to pesticides than adults. At the early stage of their lives their immune systems, their endocrine systems and their neurological systems are all still developing, their brains are developing and they’re very sensitive to the effects of even very small doses of pesticides,” said Dr. Meriel Watts, senior scientific advisor to PAN AP.

The campaign highlights 20 pesticides which are particularly hazardous for children. All of them interfere with a child’s developing endocrine system (hormonal system). Some of them cause acute poisoning, and many have been linked with cancers, including childhood cancers. Several are also known to cause developmental delays and behavioral changes.

More worryingly, 12 of the 20 pesticide highlighted are known to contaminate breast milk, and 11 have been found in placental cord blood – meaning children are being born “pre-polluted”.

“That children are being born already contaminated with pesticides that will undermine their intellectual ability and their health for the rest of their lives, is a tragedy beyond measure. This must stop. It is up to every government to make sure that children are protected from these damaging chemicals by banning them and making sure they are never again used in our countries,” Dr. Watts said.

The European Union has already banned 12 of the pesticides on the list, New Zealand still uses 14, including 7 banned in the EU. Some of these were assessed by the Environmental Protection Agency (EPA) last year, but their use was allowed to continue as farmers and food producers said they needed them.

“Apparently the New Zealand government cares more about what growers say they need, even though safer alternatives exist, than it does about children’s health and the future of society. Just one of those pesticides, chlorpyrifos, known to reduce children’s IQ, is linked by international scientists with a silent pandemic of developmental neurotoxicity that is undermining the functioning of society.”