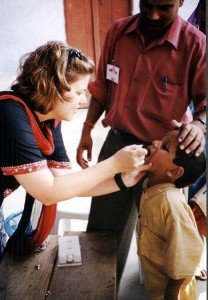 Scientists are celebrating a ‘major milestone’ in the fight against polio. According to the US Centre for Diseases, it appears the second of three strains of poliovirus has been eliminated after mass vaccination campaigns.

Wild poliovirus type 2 was eradicated in 1999 and type 3 hasn’t been seen in over two years. However, the news comes as polio cases in Pakistan are rising, and new cases are reported in South Sudan and Madagascar.

Experts say the world is closer than ever to defeating polio, although the situation in Pakistan is ‘worrying’.

Poliomyelitis, commonly known as polio, is a highly infectious virus which causes paralysis in one out of 200 cases. It commonly targets young children and can cause death when the muscles which aid breathing stop working.

Dr Stephen Cochi, a senior adviser at the CDC’s Centre for Global Health, said, “We may have eradicated a second of three; that’s a major milestone”.

The polio vaccination programme is seen as one of the World Health Organisation’s major worldwide successes. Huge progress has been made in eradicating the disease, from 350,000 reported cases in 1988 to 416 in 2013. Since the increased instability in Syria, concerns have been raised about a possible resurgence of polio due to the interruption of vaccine programmes in the region.

“Seriously damaged health infrastructure, poor health access and utilisation because of insecurity inside Syria, and massive movements of vulnerable and at-risk populations in and out of Syria – all make controlling the outbreak and rendering health protection to Palestine refugees in Syria and across the region very challenging,” said a World Health Organisation official reported the Independent.

Type 1 polio remains endemic in three countries, Pakistan, Nigeria, and Afghanistan. Dr Cochi told the BBC, “It’s the most prickly one. For reasons that are unclear, this is the most common cause of polio outbreaks and the most frequent cause of paralytic polio.”

There has been progress in Nigeria with cases falling to six reported this year, down from 53 in 2013. Scientists are cautiously optimistic it could be wiped out by the end of 2014.

“Pakistan is a major concern, about 85% of wild type 1 poliovirus this year has been in Pakistan, but in Nigeria there is real hope we can get rid of type 1 even by the end of this year,” Prof Walt Orenstein, from the vaccine centre at Emory University in the US, told the BBC.