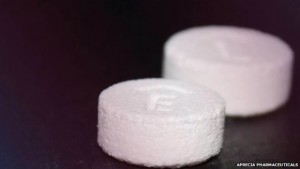 Spritam is the first 3D printed drug to be approved by the FDA.

3D printing is nothing new in our highly advanced and technological world. It was co-developed in the 1980s by Michael Cima, PhD and Professor Emanuel Sachs. Today it is commonly used in the medical field to provide patients with jaw replicas, dental implants, prosthetics, and more. After two decades of investigations, the US Food and Drug Administration (FDA) has finally approved the very first 3D-printed pills.

Dubbed Spritam, this drug was developed by Aprecia Pharmaceuticals, a privately owned company based in Ohio. The tablet is prescribed to patients who suffer from certain types of seizures brought on by epilepsy. When taken with liquids, these pills dissolve quickly.

“Specifically, it is a non-compression method for making tablets and, as such, these dosage forms can have sufficient porosity to rapidly dissolve when taken”, says 3D printing founder Cima. While this is just the very first pill approved for 3D printing, this could be the start of a whole new era in medical history.

According to Aprecia, the pills are packaged in more precise dosages. Because of the way the pill is constructed – in layers – one single pill can contain up to 1,000 mg of pharmaceutical compounds. This means that with a single pill patients could receive the maximum strengths of levetiracetam (the active compound in Spritam). Patients can now receive personalised dosages when prescribed with this drug.

Essentially, printing requires software, hardware and ink, which means that medical institutes and pharmacies will be able to print pills for individual patients with a simple adjustment of the dosage on the software. According to Dr. Mohamed Albed Alhnan, a lecturer in pharmaceutics at the University of Central Lancashire, this makes customized drugs much more accessible as there is no need to mass-produce.

“The uniformity of dosage control with this type of manufacturing method is at least as good, if not far better, than conventional manufacturing. Thus, [the] only risk is really associated with the active ingredient”, explained Cima.

The only other major risk being faced by 3D printing is the illegal manufacturing and labeling of drugs. This only means that the pharmaceutical company and the FDA have to try and keep illicit use of 3D printers at bay, because, as Lee Cronin, a chemist at the University of Glasgow, stated, “it could mean that you could print your own medicine at home”.

Aprecia Pharmaceuticals and other researchers are working hard on the production of other drugs through 3D printing now that the FDA has approved this method. Spritam is due to be launched on the first quarter of 2016.

While Spritam might just be available in the United States for now, this technology could reach new heights, making medicine distribution much cheaper and personalised worldwide. Perhaps in the next 15 years 3D printers will become more commercialised, allowing more people to print their medications at a local pharmacy. For expats who rely on daily life-long medication this could be a relief in the future if they need to purchase medication that is not available over the counter in their new home country.