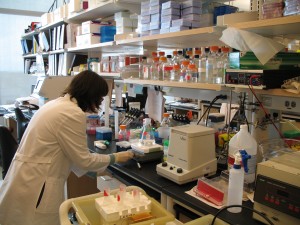 1.1 million men worldwide were diagnosed with prostate cancer in 2012.

Through the genetic profiling of 259 men, scientists in the UK have been able to identify five different sub-types of prostate cancer. In 2012 alone, over 1.1 million men worldwide were diagnosed with this disease, and the rate has been increasing ever since. In some places, like the UK and America, prostate cancer is one of the most common cancers and among the leading causes of cancer-related deaths.

Until today, prostate cancer was considered to be one type of cancer, and patients were treated all the same. However, this new study has shed light on five distinct sub-types or groups which allows us to narrow down the treatment to what is specifically needed for each patient. Doctors can now decide which patients are more at risk of their tumors growing and spreading so they can be treated accordingly.

The challenge lies in being able to tell whether the tumor will grow slowly and possibly never cause any health problems in a man’s life, or if it will be aggressive and require urgent treatment, says Malcolm Mason, prostate cancer expert at Cancer Research UK. “This means that some men may get treatment they don’t need, causing unnecessary side-effects, while others might benefit from more intensive treatment.”

Other studies have also revealed that prostate cancer is twice as prevalent among black men than white men, and four times more common than with Asian men. New campaigns will be launched to target the most vulnerable group to get screenings and regular check ups.

Regular screenings are recommended, as long as they are informed and recommended by a doctor, especially for older men. Age, ethnicity and family history all play a role in the probability of getting prostate cancer. Screenings can help measure PSA (prostate specific antigen) levels in the blood. Generally, higher PSA levels indicate a higher risk of prostate cancer; however, they can also indicate other things such as prostate infection or an enlarged prostate, which do not necessarily relate to cancer. Certain medications and medical procedures can also be reflected in these levels.

Regardless of screenings,the main symptoms men should be on the lookout for are:

While these studies are baby steps in the research on cancer around the world, they sure are promising. More studies are needed to determine whether these results will hold up, according to Mason; but in the meantime, scientists are able to start narrowing down the treatment to the specific sub-types or groups.