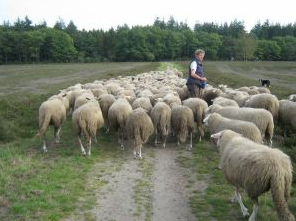 The US and western Europe have a high density of livestock, making them at risk of animal to human diseases outbreaks.

A new study has mapped 20 global hotspots for animal-human diseases. Thirteen “unlucky” zoonoses (diseases transmitted from animals to humans) are responsible for 2.4 billion human illnesses and 2.2 million deaths per year.

Perhaps unsurprisingly, Nigeria, Tanzania and Ethiopia in Africa, and India in Asia suffer from widespread illness and death due to zoonotic illness. Meanwhile, the northeastern United States, Western Europe (especially the United Kingdom), Brazil and parts of Southeast Asia may be hotspots of “emerging zoonoses” – those that are newly infecting humans, are newly virulent, or have newly become drug resistant.

Three quarters of emerging infectious diseases are zoonotic, and 60 percent of all human diseases fall in the same category. The zoonoses studied here fall into three categories.

The report, which was conducted by the International Livestock Research Institute (ILRI), the Institute of Zoology (UK) and the Hanoi School of Public Health in Vietnam, maps poverty, livestock-keeping and the diseases humans get from animals. Researchers compiled a “top 20” list of geographical hotspots from the data.

Countries with high densities of livestock are thought to have a high risk of emerging zoonotic disease. This is evident in the northeastern United States and Western Europe. These regions have high levels of emerging zoonoses (eg. BSE and Lyme disease) but low risk of people falling ill or dying.

The low death rate is more than likely due to accurate and prompt reporting of outbreaks and the high quality medical care in rich countries.

Delia Grace, a veterinary epidemiologist and food safety expert with ILRI in Kenya and lead author of the study said:

From cyst-causing tapeworms to avian flu, zoonoses present a major threat to human and animal health. Targeting the diseases in the hardest hit countries is crucial to protecting global health as well as to reducing severe levels of poverty and illness among the world’s one billion poor livestock keepers. Exploding global demand for livestock products is likely to fuel the spread of a wide range of human-animal infectious diseases.