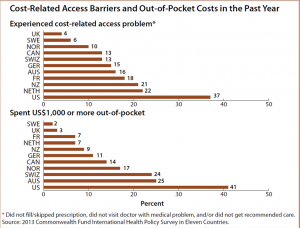 An international health study of 11 countries highlights Americans’ dissatisfaction with their health system.

An international survey of 11 developed countries, American adults are the most likely to forego treatment due to the cost, struggle to pay bills, and spend the most out-of-pocket on treatment.

The results revealed that in 2013 37% of U.S. adults either didn’t see a doctor, didn’t seek the recommended treatment, or failed to fill a prescription because of prohibitive costs. This compares with only 4% of respondents in the UK and 6% in Sweden.

The 11-country survey from The Commonwealth Fund highlighted Americans’ general frustration with their healthcare costs, accessibility, and complexity compared with peer nations.

The survey found 41% of insured and uninsured U.S. adults spent $1,000 out-of-pocket on health care in the past year, not including premiums. High deductibles and cost-sharing, along with no limits on out-of-pocket costs, may explain why even insured people in the U.S. struggled to afford needed health care, the researchers said.

Nearly a quarter (23%) of Americans either had trouble, or couldn’t pay medical bills. This is compared to 13% of adults in the next highest country, France. In Norway, the UK and Sweden 6% of people, or less, reported having the same problems paying their bills.

The U.S system particularly stands out in the survey because of the high costs, and the fact the U.S. is the only nation without universal care for basic medical needs. The study does show however, where an insurance gap exists, consumers in other countries skip care as well.

In New Zealand for example, state health insurance doesn’t include dental cover, consequently, 41% of adults haven’t seen a dentist in the last two years. In Australia the rate is 28%, slightly above that of the U.S. at 27%.

The Commonwealth Fund study also included the latest figures for healthcare spending, U.S. spending in 2011 averaged $8,174 per person. The nation spending the next-largest amount was Switzerland, at $5,643 per person.

“All of these countries enacted universal or near universal health coverage decades ago,” said Cathy Schoen, the Commonwealth Fund’s senior vice president and lead author of the report.

“This study, which offers benchmarks to assess the progress of U.S. health reforms from an international perspective, clearly underscores the need to simplify our health insurance system and ensure that people can get and afford the care they need.”