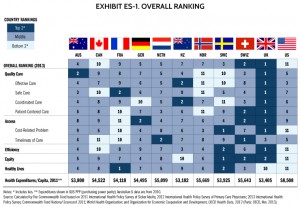 The UK comes top in many categories, with the US bottom overall.

In an international study from the Commonwealth Fund, the U.S has been ranked the worst country in terms of health system quality and efficiency. The study of 11 industrialized nations found despite spending the most on healthcare ($8,508 per person), the U.S system is the worst across five categories.

The UK, despite spending $3,406 per person on healthcare, ranked first in the majority of criteria, only falling down in the healthy lives category which measures factors such as infant mortality, preventable deaths and healthy life expectancy from age 60. The UK came top in all criteria measured in the care quality category, and in health system efficiency, falling to third place for waiting times.

The complete rankings are as follows:

“It is disappointing, but not surprising, that despite our significant investment in health care, the U.S. has continued to lag behind other countries,” said lead author Karen Davis.

The report, Mirror, Mirror On The Wall – 2014 Update, contains national health system scorecards and data from WHO and the OECD. It has been previously produced in 2004, 2006, 2007, and 2010, and the US came bottom each time. However, as the Atlantic points out, the data for the 2014 update was collected before the Affordable Care Act (Obamacare) had been fully implemented.

“With enactment of the Affordable Care Act, however, we have entered a new era in American health care. The U.S. performance on insurance coverage and access to care should begin to improve, particularly for low-income Americans. The Affordable Care Act is also expanding the availability and quality of primary care, which should help all Americans have better care and better health outcomes at lower cost.”