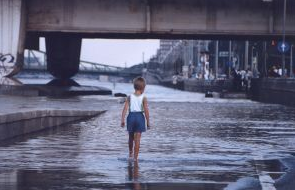 If climate and health services worked together lives could be saved with better preparedness, early-warning systems and risk reduction.

Changes to the world’s climate is having an effect on the health of millions of people around the globe. The World Health Organisation has published an Atlas of health and climate in conjunction with the World Meteorological Organization (WMO).

Cyclones, floods and droughts affect the health of millions of people every year. Climate variability and extreme conditions such as floods can cause epidemics of illnesses such as diarrhoea, malaria and dengue fever, which can cause death and suffering for millions.

The maps, tables and charts in the Atlas demonstrate links between climate and health:

“Stronger cooperation between the meteorological and health communities is essential to ensure that up-to-date, accurate and relevant information on weather and climate is integrated into public health management at international, national and local levels,” said WMO Secretary-General Mr Michel Jarraud in a statement.