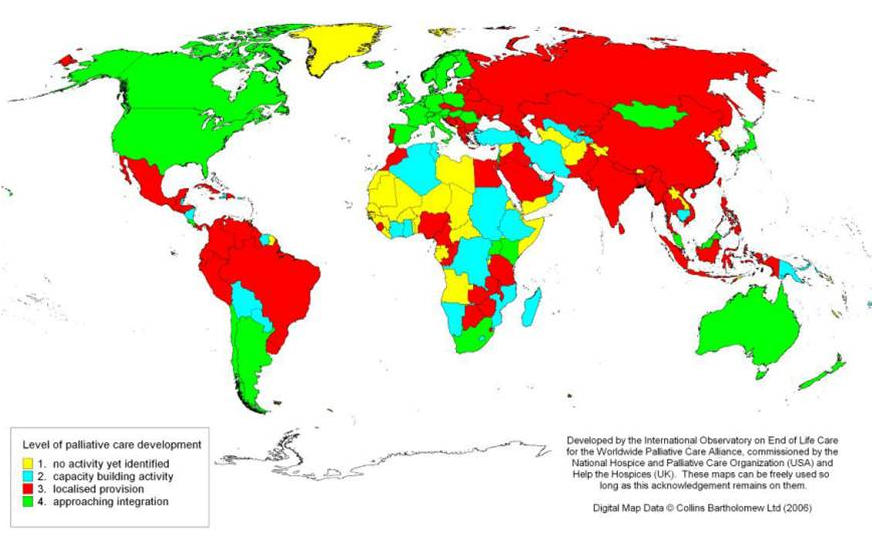 The map shows the development level of palliative care around the world.

A new international survey has revealed governments around the world are leaving cancer patients with untreated pain. Millions of patients lack access to pain-relieving drugs, often leaving them in debilitating pain which can have long-term negative psychological as well as physiological effects.

The study was conducted between December 2010 and July 2012 with reports submitted by experts in 76 countries and 19 Indian states. The researchers found very few of the countries provided all seven of the opioid drugs considered essential for the relief of cancer pain by the International Association of Hospice and Palliative Care. Those essential medications include, among others, codeine, immediate and slow release oral morphine, oral oxycodone and transdermal fentanyl.

In many of the countries, fewer than three of the seven drugs are available. Those that are routinely used are often unsubsidised or poorly subsidised by the government and availability can be limited. In addition, many countries have strict rules regarding the entitlement of cancer patients to prescriptive medicine and increase the bureaucratic burden of prescribing and dispensing medications.

The study data is being used to tackle the problem of access to and the availability of pain-relieving medicines. Unrelieved cancer pain is a cause of major worldwide suffering, not because we don’t have the tools necessary to relieve pain, but because most patients don’t have access to the essential pain-relieving medication,” Professor Cherny, lead author of the report from Shaare Zedek Medical Center, Jerusalem, said.

“This pandemic affects literally billions of people. Not only are the patients suffering often terrible unrelieved pain, but their family members are often permanently scarred by the memories of witnessing such suffering in their loved ones.”

“According to the World Health Organization, the incidence of cancer was 12,667,470 new cases in 2008 and based on the projections it will be more than 15 million cases in 2020. These statistics suggest that cancer-related pain may be a major issue of healthcare systems worldwide,” commented  Dr Carla Ripamonti, head of the Supportive Care in Cancer Unit of the IRCCS Foundation National Cancer Institute of Milan.