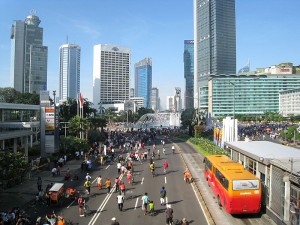 When moving abroad, a host of health-related worries probably go through your mind, but how often do you consider the risk of natural disasters in your new home?

Swiss Re, a global reinsurance company, have analysed the risk of earthquakes, cyclones, hurricanes, storm surges, river flooding and tsunamis in 616 cities around the world in a recent report. The study estimated the number of people who might die, be injured or evacuated in the event of a natural disaster. We take a look at the five riskiest cities.

Asian cities were found to be the worst in terms of the number of people who would be affected by a natural disaster. In Jakarta, 27.7 million people could potentially be affected by the natural disasters included in the report. As 70% of Jakarta lies below sea level, particularly in the north of the city, it is especially susceptible to flooding. As recently as 2007 and 2013, fatal flooding has occurred in the city, especially when heavy rainfall occurs in conjunction with high tides.

Home to 14.6 million people, the cities of Osaka and Kobe are at risk from earthquakes, storms, and flooding. The infamous Great Hanshin Earthquake in 1995 killed approximately 6,400 people. The area is also prone to typhoons and storm surges, and is the third most at-risk city for tsunamis in the world.

This vast flood plain is home to more than 42 million people and includes the cities of Hong Kong, Macau, Guangzhou, Dongguan, and Shenzhen. This is the number one metropolitan area threatened by storm surge with 5.3 million people potentially affected, third-highest for cyclone damage (17.2 million) and fifth riskiest for flood damage.

One of the 16 cities which make up the metro Manila region, Manila city is home to 1.7 million people and one of the riskiest cities you can live in when it comes to natural disasters. The report estimates some 34.6 million people would be affected if a catastrophic disaster hit the region. In the path of several typhoons each season, also prone to landslides triggered by heavy annual rainfall, and on the notorious Pacific Ring of Fire, Manila earns the second spot on this list.

Japan’s second entry in the top five, the 37 million people living in Tokyo-Yokohama are exposed to earthquakes, typhoons, flooding, and tsunamis. Around 80% of Tokyoites, 29 million people, are potentially exposed to a large earthquake at any one time. Tokyo and Yokohama were devastated by the Great Kanto Earthquake of 1923, which killed 142,800 people. Residents in this densely populated region are always alert for the next “Big One” which experts predict could occur anytime.

Swiss Re uses the report findings to highlight how cities, governments and individuals can better prepare for a natural disaster in order to minimise damage to property, loss of life, and economic impact.

“Already today, major river floods alone have the potential to affect 380 million people living in cities; and some 280 million people could be impacted by severe earthquakes,” says Matthias Weber, Group Chief Underwriting Officer at Swiss Re.

“We need to better understand what makes cities more resilient and what decisions about investments and infrastructure are needed to minimise the loss of life, property and economic production.”