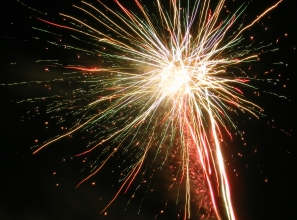 Today is Guy Fawkes, or Fireworks Night in the UK. For many British expats around the world this means a bonfire, fireworks, and sparklers. There will be hundreds of organised outdoor displays across Great Britain, with many more private displays in people’s gardens.

For those who don’t know what Guy Fawkes night is, it’s a annual festival celebrated on the 5th November predominantly in Great Britain, though events are also held in countries with significant British expat populations. It celebrates the foiling of the Gunpowder Plot – Guy Fawkes and several conspirators attempted to blow up the English parliament and King James I in 1605.

Nowadays, people gather for a bonfire, set-off fireworks, and burn the “Guy”, a figure representing Guy Fawkes, made of stuffed clothing.

Of course this isn’t the only event where fireworks are used – New Year, 4th July, Chinese New Year are all routinely celebrated with fireworks. So how can you have fun and stay safe around fireworks?

Kids love playing with sparklers, they can be a lot of fun, just remember:

Thousands of injuries are caused by fireworks every year, and they were also responsible for 17,000 fires in the US last year alone. So stay safe this year either at a public display or a well-organised private one.