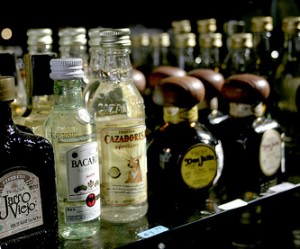 Scottish doctors are fighting hard for a law putting a minimum price on alcohol. They say higher prices will curb a national drinking problem that costs the public health system an estimated GBP 28 million a year.

Other “every day stats” on Scottish drinking:

Just yesterday the minimum pricing legislation went before the Scottish Parliament, where it is now up for debate. The new law would make it illegal for retailers to sell hard liquor at “rock bottom” prices, according to a BMA statement.

Dr. Brian Keighley, Chairman of the BMA in Scotland, said:

There is an urgent need to legislate. For too long supermarkets have been piling it high, selling it cheap, when it comes to alcohol. These ‘responsible retailers’ are already working on how to navigate the loopholes of the new laws on drink promotions and it is clear that by encouraging bulk buying at low prices, these retailers are placing profit before public health.

Alcohol misuse in Northern Ireland costs our economy almost £700 million pounds. There are direct costs to hospital services and the criminal justice service, compounded by indirect costs such as loss of productivity and the impact on family and social networks.

He said increasing the minimum price of alcohol would have two major effects: 1) reduce drinking across the population, including (perhaps especially) young people, and 2) lower rates of violent crime, accidental deaths and chronic health problems related to alcohol.

The Northern Ireland Executive recently announced it was determined to introduce new legislation applying minimum prices at the local level.