The 1.1 million British pensioners living abroad are increasingly concerned about the exchange rate of the pound. In a recent survey from Lloyds TSB International among British expatriates released today, over two thirds of respondents said they have worries about reduced pension income. 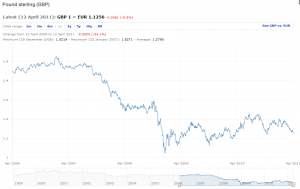 The Sterling has suffered a fall of more than 20% against the Euro since the financial crisis and remains weak against currencies in many places which are popular spots for retiring expats. This is especially problematic for less affluent pensioners: 89% of respondents with an income of less than GBP25,000 per annum are now expressing these concerns about their financial situation.

“The weak pound has cut some expat pensioners’ income by a quarter since the financial crisis”, says Jakob Pfaudlersm TSB International Managing Director. “While many people can cope with a temporary fall in earnings, the pound has now been weak against the Euro, for example, for about three years so it is little wonder that many expat pensioners are worried about their continued loss of spending power.”

The study also found that significantly more retiring expats are moving their money into offshore accounts. In fact, 42 per cent of those polled said this was a decision they had taken, compared to the 26 per cent who were doing the same just six months ago.

In addition, the research showed that along with more offshore bank accounts used by expats, the UK has seen a major fall in the number of people saving money in UK accounts – with this figure dropping from 39 per cent to 23 per cent between July 2010 and March 2011.