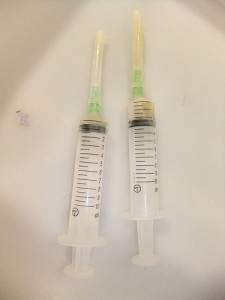 A Chinese clinic may have spread Hepatitis C by re-using dirty needles.

An outbreak of hepatitis C in two Chinese towns may have been caused by a medical clinic re-using dirty needles. According to a report on ChinaDaily.com, there have been 86 confirmed cases so far–but the total could be much higher.

Hepatitis C is an infection of the liver. It can cause scarring and cirrhosis, which may eventually lead to liver failure (and death). There is no cure, and the disease is typically spread by either drug use or poorly sterilized medical equipment.

According to the report by Shan Juan, the Chinese outbreak was linked to a family-run clinic in Henan Province. An initial investigation didn’t turn up any infected needles, but some health authorities say they may have been sterilized before investigators arrived.

This case highlights the challenges facing the Chinese health system over the coming years. While private facilities in major cities are on par with western standards of medicine, elsewhere in the country they are seriously lacking.

Poor standards also give expats and their employers little incentive to support the country’s new social insurance tax, which charges them more in return for access to the public health system. After all, access is something of a booby prize if you come out of treatment with a lethal liver infection.

Because standards vary so widely across Chinese medical facilities, we continue to recommend expats stick to large, international hospitals in major cities, and avoid small, local clinics whenever possible.