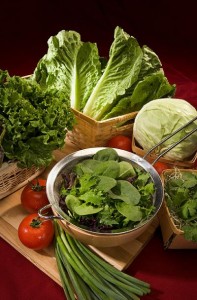 Leafy greens and tomatoes are the most common sources of food-borne illnesses such as e. coli.

What’s a safe and healthy salad worth? Millions, according to food regulators and produce farmers in the US. Lives are at stake after all.

Just this summer a deadly e. coli outbreak caused by Egyptian fenugreek seeds spread across Europe, killing dozens and sickening hundreds more. But this is just the most recent case in a long history of deadly food illnesses. In 2006, for example, contaminated spinach killed three people stateside.

Now a team of US researchers from various universities, the US Department of Agriculture (USDA) and the Food & Drug Administration (FDA) plan to tackle the problem comprehensively. They aim to create a scientific basis for safe, hygienic practices in farming, packing, transporting and storing produce.

For financial backing the team has USD 9 million–a USD 5.4 million grant from USDA and another USD 3.6 million from the food industry. Clearly safe salads are serious business.

According to Robert Buchanan, a professor at the University of Maryland and lead investigator on the project:

Leafy greens and tomatoes remain the produce items most frequently responsible for outbreaks of food-borne illnesses, yet we still don’t know what specific safety guidelines are justified scientifically.

He emphasized the importance of basing food safety regulations on science, lest the public end up with “legal wrangling” instead of “safer salads.”

The science must be solid enough to withstand domestic legal challenges and international trading disputes. Producers, processors and consumers must be assured that the good practice standards apply to their region.

Though this is a US study, such a large-scale effort should also prove influential elsewhere. In fact, it could create a basis for new food safety regulations worldwide.